Everyone in the exhibition poultry world has heard of the cochin bantam; a small, yet lovely bird who resides in the feather legged class. In show halls all across the USA, bantam cochins appear as class and show champions. Among this feather legged breed there are two varieties that are most popular throughout the show halls; the black and the white varieties. But among this breed is also a lesser known variety. A beautiful yet under-appreciated variety in need of saving – the red cochin bantam.

In this article I will be discussing the history, temperament, and where to obtain this wonderful variety that is in need of saving.

Me and the Red Cochin:

There are 19 varieties of cochin bantams that are accepted by the ABA (13 in the APA) and red cochin bantams are among one of those varieties accepted. When well bred, red cochins are a very attractive bird, known for their deep glossy red color. Anywhere you take them they are sure to be a showstopper. Yet sadly, red cochins of quality are rarely seen in the show halls anymore. I only know of a handful of people that breed reds to the Standard of Perfection, and can count them on one hand. Reds are just among one of the varieties that need dedicated people who aren’t afraid of a challenge to save the variety.

I first came across red cochins when I was over at a fellow poultry breeder’s house, when I saw a red cochin pullet run past me. Right then and there I decided that I needed some reds of my own. So at the beginning of 2021, I purchased that pullet and a young cockerel, starting my red cochin journey. While I have only had them for just under a year, my goals (along with the handful of red cochin breeders) is to get the reds up to the quality of the blacks and whites, and to eventually make this variety a common sight in the show halls. Without the help of more dedicated breeders who are willing to put the time, work, and effort into breeding quality reds, they will soon be lost and gone for all future generations. 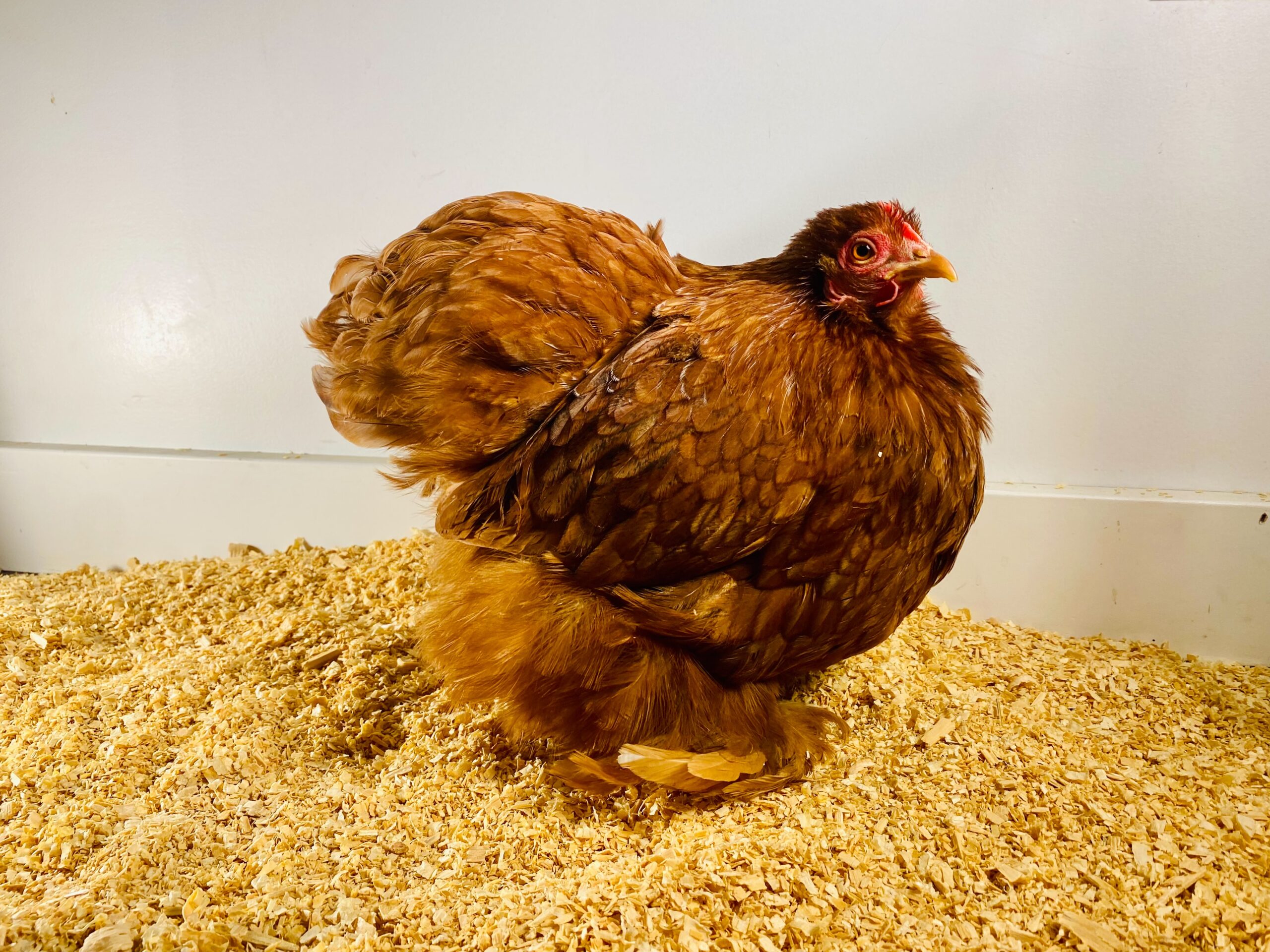 History, Temperament, and Color Description of the Red Cochin:

Cochins were originally called “Chinese Shanghai fowl” or the “cochin china,” the name later being changed to “cochin”, the name that we know today. They were brought to America and England in 1845. The cochin had a striking appearance, having soft, loose and profuse feathering, which distinguished it from all other known breeds at the time. Because of this, the cochins were a sensation in England, causing great popularity for the “Chinese Shanghai fowl.” These days were called the “hen fever” or the “cochin craze”.

4 varieties of Cochins were originally accepted into the APA in both large fowl and bantam: partridge, buff, white, and black (all being accepted in 1874).

In 1977 the red variety was accepted into the APA. While we do not have much information about the reds and their roots, we know they were originally created using a Buff cochin bantam crossed with a black cochin bantam.

The color on a red cochin is supposed to be a deep lustrous red or a very rich and intense red, free from color defects such as: mealiness, shaftiness, mottling, and smut. There is currently debate on what shade of red this variety is supposed to be, so we will leave it as how the Standard of Perfection describes this color. Eye color is reddish Bay and beak color is reddish horn.

Reds are commonly known to be a little more wild or flighty than many of the other varieties, but they can easily and quickly be tamed with some dedication and handling, and they will become very docile when worked with. Reds also seem to crave more sunshine than the other varieties, loving to be outside in the sun, grass, and dirt.

Where to Obtain Red Cochins:

Unfortunately there are only few birds of quality in the red variety. This means that when people do decide to work with reds, they are having to buy birds from a hatchery and start from scratch. I was very fortunate to obtain a very nice pair from Brent Warner. But rest assured, if you dig deep enough, there are a few breeders who are very dedicated to this variety, and if you are serious enough about it, may be able to help get you started. I will list them below: 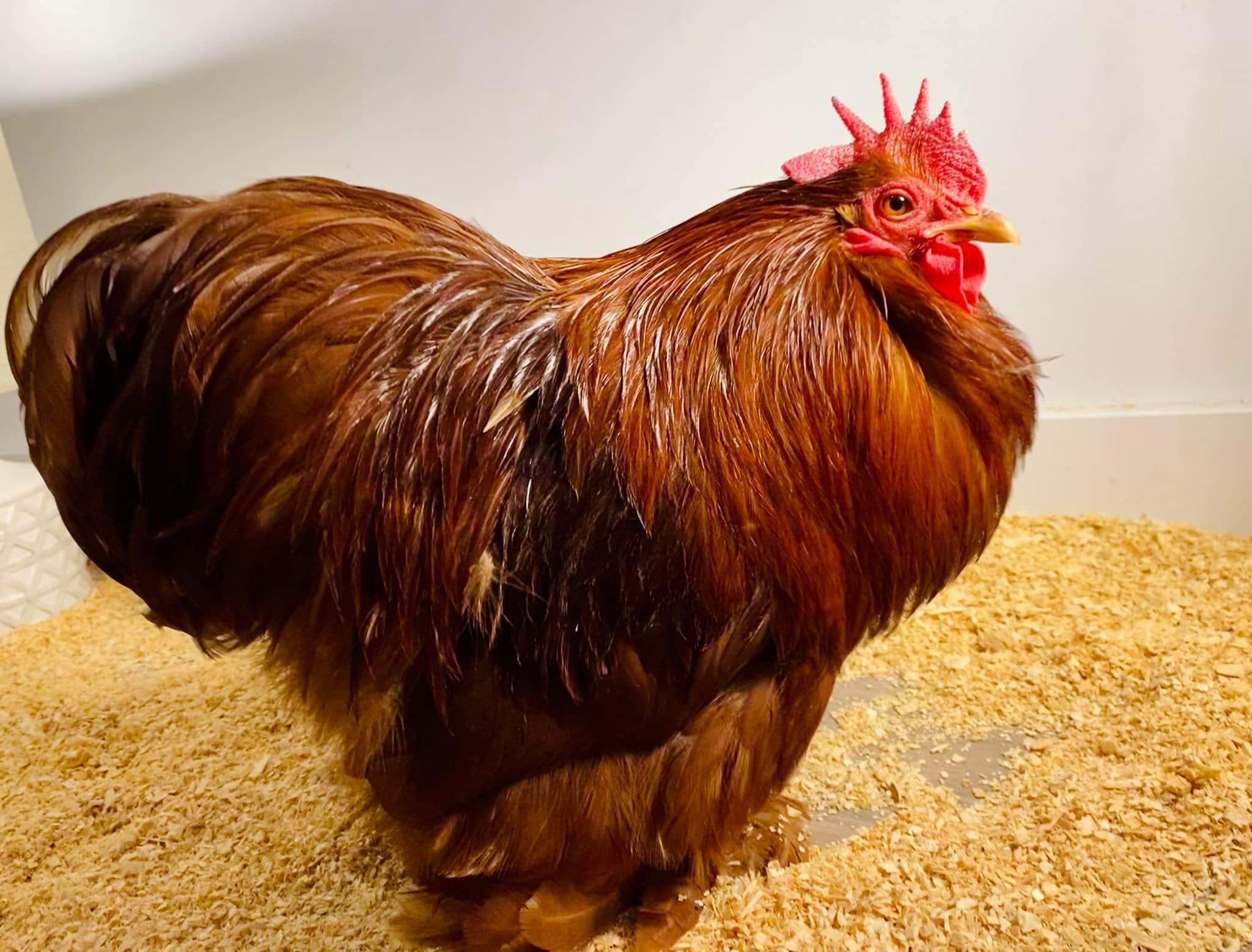 Why this variety of Cochins?

The red cochin is just one out of 19 varieties of cochin bantams, why should I raise the reds over a different variety?

Well, the reds are a stunning and attractive bird that is needing dedicated breeders like you, who aren’t afraid of a challenge, to take them under your wing and help bring this variety back to their former glory and save this variety from extinction. Reds are not bred to the quality like whites and blacks are, but with dedicated people, this can be accomplished!

So, are you ready to help make the red cochins a variety that will thrive for years and generations to come? I will not lie, it definitely takes a lot of work, effort, and time (just like any breed or variety does) but it is well worth the reward of getting to see a beautiful and well bred Red Cochin, and knowing that your efforts are going to help preserve this wonderful color of cochin for many years to come.

Note: All of this information has been obtained by several different red cochin breeders  including: Myself (Hannah brown); Annamay Carlson; Richard Andree; and Brent Warner.

My passion for poultry began in 2013 when our family moved from the city to a farm, and we got our first flock of chickens. I joined 4-H 2 years after, beginning my journey of showing birds at our county fair. After finding out how much I loved to show poultry, I became our clubs poultry project leader. In beginning of 2021 I acquired my first trio of show quality birds. April of 2021 i started showing competitively in APA/ABA shows, and I’ve been hooked on showing competitively ever since. I have started working with Cochin bantams in the Red and white varieties, as well as white crested black polish bantams. In fall of 2021, i got my first Reserve of breed win, with my red cochin cockerel winning RB out of 40 cochins in a junior show. While I am still just a youth, I hope and plan to show and raise birds for many years to come. Apart from birds, I also have a part time business sculpting and creating art-dolls, sculptures and custom orders. I also am the 3rd oldest out of 10 kids, so it keeps my life interesting!