Predators: Thieves in the Night

This article on predators is an excerpt from the Small Flock Poultry Health Manual published by the Province of B.C. Ministry of Agriculture. The full manual can be accessed by clicking here.

Poultry producers should be aware of the possibility of losses to predators. Owners of small flocks usually have more difficulty with predators than those with large flocks, primarily due to differences in housing. Small flocks are sometimes housed in buildings that need repair or are not specifically designed for poultry. As a result, predators have less difficulty gaining access to the birds. However, large flocks housed in new buildings in good repair can also be victims if proper precautions are not taken. Anticipating problems and taking necessary preventative action is the best defense against predators.

Properly constructed houses can do much to discourage predators. Deep foundations keep animals from tunneling under, tight fitting windows and doors that are screened with poultry netting or hardware cloth keep unwanted visitors out, and siding and/or curtains kept in good repair also prevent entry from outside. These suggestions apply to all sizes of houses and all sizes of flocks.

Rats and mice, although not usually problems as predators, encourage the entry of other predatory animals by gnawing holes in the wood or by burrowing around buildings. A good rodent control program is necessary for proper predator control.

If small flocks are allowed outside the house, fences are important. Fences not only confine the birds to a desired location, but if they are properly constructed, they keep out most predators. A mesh wire with openings smaller than one inch is recommended. Burying fencing with the lower 6-12 inches turned outward deters predators from digging under the fence. A convenient method of burying the lower part of the fence is to plow a furrow against the turned portion.

The following key may aid in identifying the predator:

2. One or two birds killed 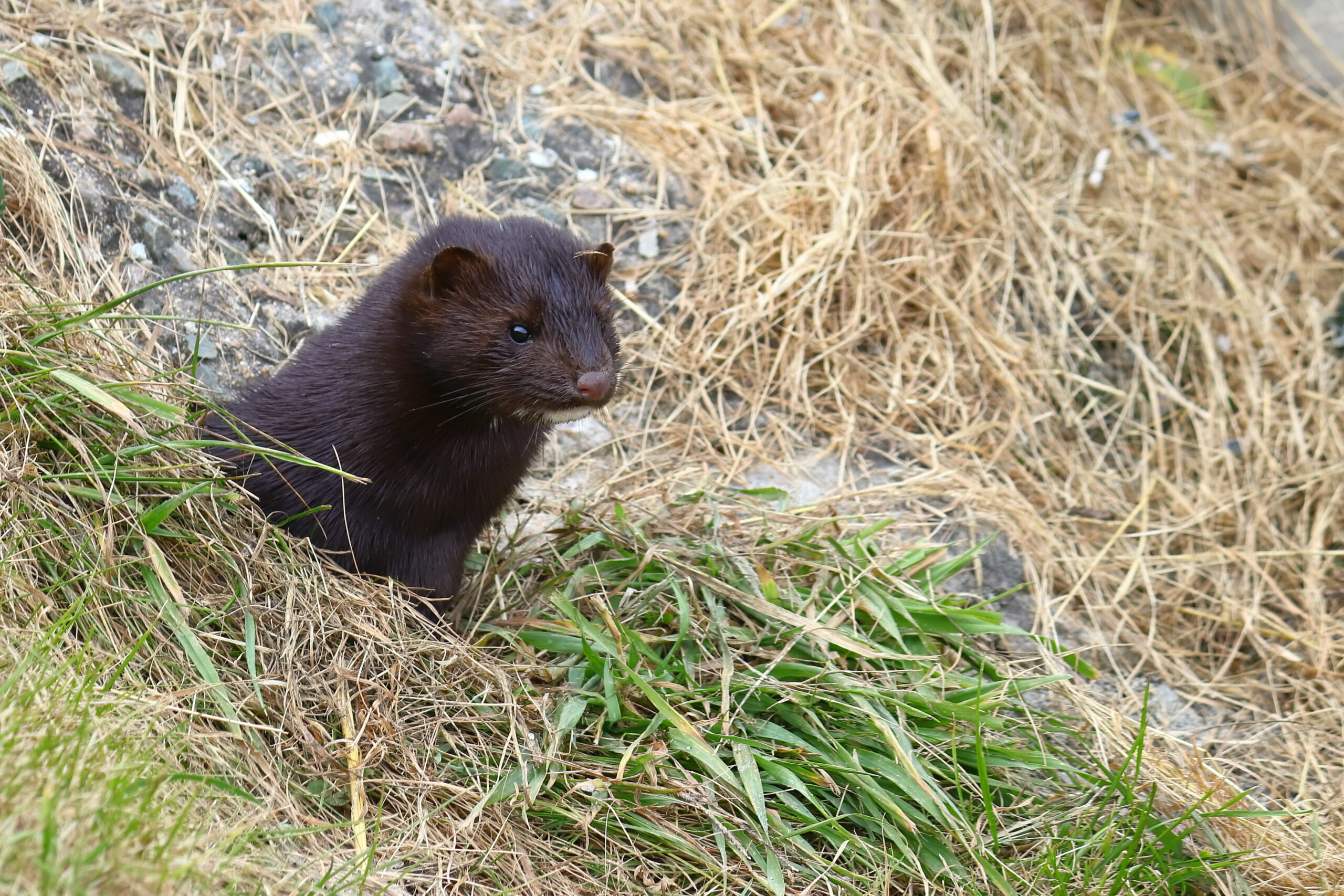 In many instances predators leave clues to their identity when they have visited a poultry house. From these clues the poultry producer may be able to identify the culprit and take the necessary steps to prevent a reoccurrence.

Dogs: A dog usually kills chickens for the sport. Several dead birds with much mauling of the carcasses is usually evidence of a dog. Dogs usually visit the chicken pen during daylight hours rather than at night.

Mink/Weasel: Birds usually show signs of attack on the sides of the head if a mink or weasel has visited the poultry house. With these predators, several birds will probably be killed and piled neatly together. The back of the head and neck are frequently the only parts of the carcass consumed.

Raccoon: If a predator visits only once each 5 to 7 days and eats the head and the crop of the dead birds, a raccoon is probably responsible. Sometimes more than one bird will be killed at each visit.

Opossum: The opossum generally attacks only one bird at each visit. Usually, the bird’s abdomen has been eaten. Eggs may also be the object of the opossum’s raid on the chicken house.

Owl: The only likely culprit here is the great horned owl, which does sometimes attack poultry. One or two birds are usually killed, with the talons being used to pierce the brain. The owl will usually eat only the head and neck. Feathers found on a fence-post near the chicken house or pen may provide an additional clue.

Fox/Coyote: The old sayings about the sly fox were not by accident. The fox and the coyote are very smart and difficult to catch in the act of raiding the flock. Since birds are frequently carried away with little evidence left behind, the only way of determining losses may be a head count. Visits from these predators will usually be very early in the morning. Keeping birds in a secure pen or poultry house until late morning is good insurance against losses from a fox or coyote.

Skunks: Skunks do not usually attack adult birds. They may kill a few chicks and eat the abdomen. Eggs may also be the targets. If skunks have been in the poultry house the odor is usually a clue.

Humans: Unfortunately, there can be problems from people as well as animals. If birds are missing with very little evidence, particularly from a predator proof pen or house, the possibility of humans being involved should not be overlooked.

Determining the identity of the predator is essential in preventing repeat visits. Once identification has been made, appropriate steps can be taken. Eliminating the point of entry is the first deterrent and eliminating the source of the problem by trapping or other means is the second. Trapping should be done properly to minimize the chances of catching an innocent animal. Seeking advice from a wildlife specialist is desirable if individuals have no experience with trapping. Again, prevention is the best solution to the predator problem.