This article on Call Ducks is being republished from Acorn Hollow Bantams website with permission from Lou Horton.

I began judging Call ducks in 1970 and it is amazing how they have changed in the time between then and now. The number of Standard varieties has exploded. There are now a dozen or so varieties in the ABA Standard with a strong likelihood that more will be added in the next several years. Given the popularity of the Call, those new varieties will mean even larger Call classes in the future.

Of course, not all Standard varieties of Call ducks are created equal. There is a wide spectrum of stages of development as there is with any breed which is popular enough to stimulate the creation and development of many new color varieties. See the Old English and Wyandotte bantams as examples.

In this article, I will limit myself to just two varieties of Call ducks which are not only established but are commonly seen at shows.

The original Call variety was, of course, the Gray which was developed well before the start of the twentieth century for use as a live decoy for hunting purposes.

Today, the state of development of the Gray Call is quite advanced, at least in terms of size and type. If I were to offer one criticism of the type, it would be to caution breeders not to continue their pursuit of the ultimate Call head at the expense of width of body at the shoulders and color. Body size is certainly no problem in most Call classes. As a matter of fact, I suspect that the weights of some females in particular are well below the 20 oz. level although since we do not weigh entries that observation is more of an impression than a proven fact. I do know as a breeder that ultra-small females often lay poorly or not at all and that very small males frequently are not good breeders. As a result, I believe that we are heading in the direction of having to breed from one group of birds and show another group.

My principal concern, however with the Grays is in the area of color. The females in particular typically lack defined penciling over the back (sometimes not even decent lacing) and often are extremely poorly colored underneath in the breast and rump areas. In fact, some females have lost even the semblance of good color underneath. In addition, there is occasionally a problem with loss of the brilliant metallic color in the wing speculum in both sexes. In some birds the speculum tends to be gray rather than the iridescent blue. 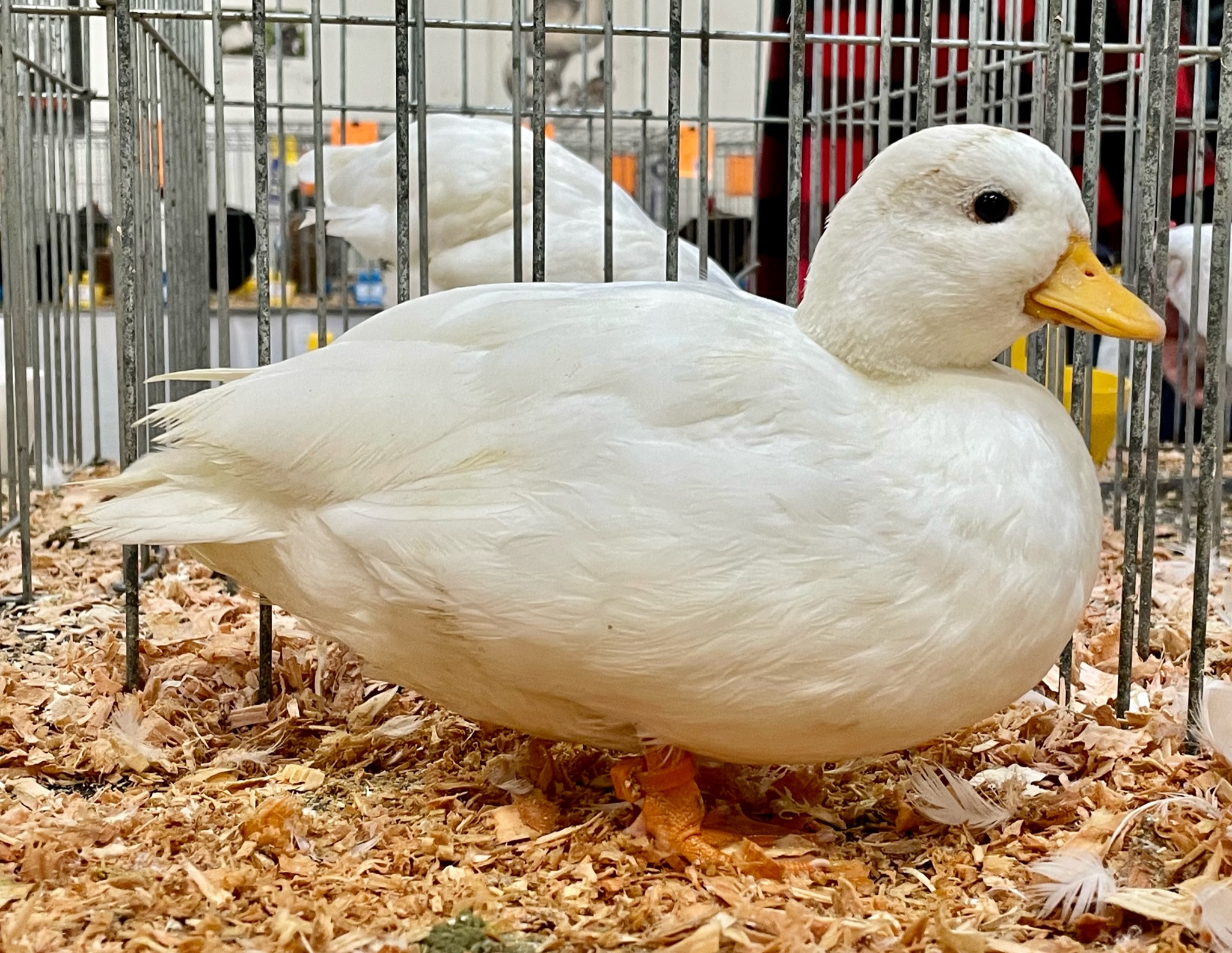 There are sometimes bill color issues in both sexes of the Grays. The lead colored bills of some females is a serious issue because it represents a total departure from the “dull orange with a dark saddle” specified by the Standard. In the male, the presence of black (other than in the bean) is a concern but should only be penalized heavily if the amount of black is significant (50% or more).

All Mallard colored male birds including the Gray Call undergo an eclipse moult during the summer which mutes the otherwise bright colors which they display most of the year when they are in nuptial plumage. Most males are only in eclipse plumage for a couple of months from late spring well into summer but some never really emerge from it. By late September if a male is still in eclipse, I would hesitate to place him highly for fear that he never really will be in full nuptial plumage. Of course, that applies to Rouens, Gray Runners, and Mallards too.

White Calls are spared many color concerns that plague the parti-colored birds which is one big reason why they are so popular. Bill color which is a pale yellow rather than orange/ yellow is sometimes seen but even that is not too common. One still sees black in the bill of females which is a defect especially common in older females. Black in the bill of a male is, of course, a disqualification.

There are, however, some problems which are apparent in the Whites as well as with the other varieties of Calls. Eye size is more noticeable in a White than with other, darker colors of Calls because it is so obvious. Calls are supposed to have large eyes. When a White Call does not, it is noticed even if the observer does not realize that the eye isn’t right. They just realizes that something is not quite right. Calls, unlike most types of poultry, do not show advanced age as quickly or as obviously as other types. If well cared for, they may be successfully shown for 4-5 years or more. The one fairly reliable clue of advanced age older Calls may offer is eyes that do not appear as large or as bright as they should be. The size of eye is equally important in other varieties of Call. It is just not as obvious as it is in Whites.

Overall size in Whites seems to be following the same trend as are the Grays with females in particular in danger of becoming too small for reliable reproduction. Of course, many judges do not see that as their problem because 1) weights cannot be quantified and 2) it is not the judge’s job to project future reproductive capabilities unless a specific characteristic is discussed among the general or breed specific

defects or disqualifications. Often breeders who go to extremes see their lines decline because of breeding problems caused by those extremes in size or type. Lack of fertility and difficulty in getting decent hatches have a way of solving some breeding concerns by putting such lines “out of business”.