Have you ever been out in your bird pens (inside or outside) and notice something running quickly along a wall or fence-line?  If you are like most folks who raise poultry, occasionally seeing a mouse or rat is not out of the question, however ignoring that situation can result in major rodent problems down the road. 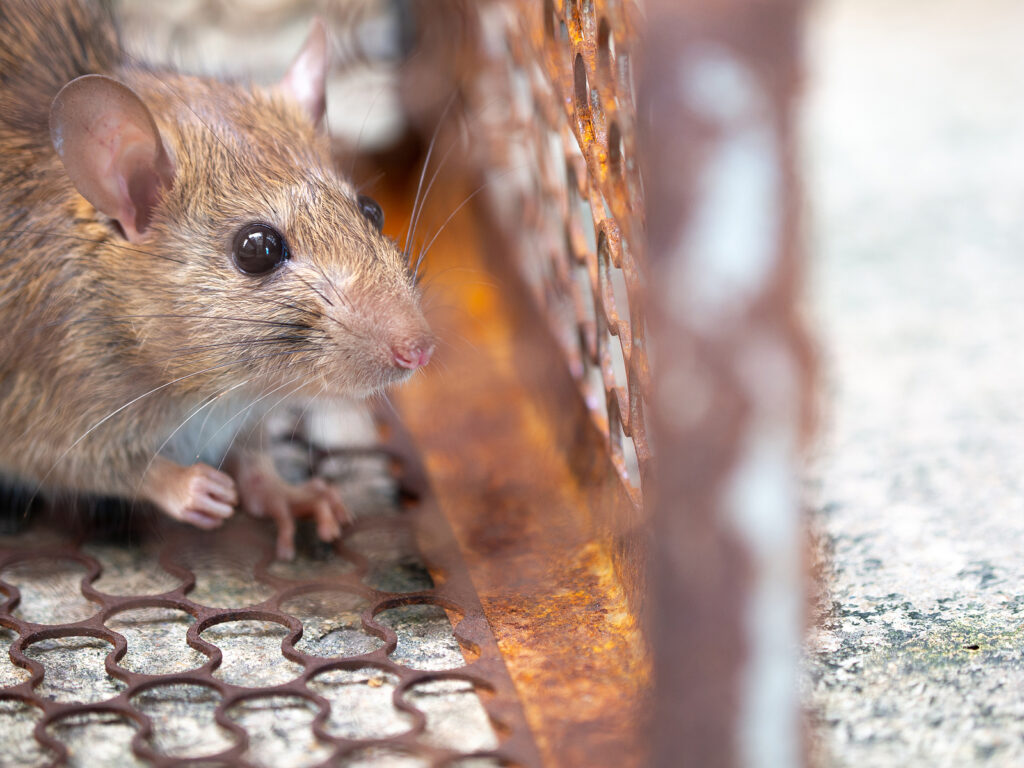 Why are rodents associated with keeping poultry or any livestock for that matter?  It all comes down to how we raise our animals.  Consider this for a moment.  What do rodents need to become established?  Food, water and safety from predators that normally prey upon them.  When you consider rodents in the circle of life, they are fairly low on the totem pole.  Just about every meat-eating animal, feeds upon rats and mice.  Hawks, owls, foxes, cats, and just about any other animal will kill and eat rodents if they can catch them.  In some cases, young mice and rats can even be eaten by chickens and ducks too!

That said, rodents like our bird facilities because in them, they can find food, water and a safe place to live.  The one exception to making this space safe would be a the presence of a barn cat or a terrier dog that some folks keep and give access to their pens.  The end result is that in the environments that we provide for our birds, rodents can often thrive to the point of becoming a major problem.

How does this happen?  Well, in a natural environment, a mouse or rat would find an area to build a nest, and in that nest, they would give birth.  They would then have to leave that area to search for food.  The entire time that they are doing this, they would be vulnerable to predators looking to kill and eat them.  Likewise, the youngsters would also be exposed and accessible to those predators as well.  In the end, only a small portion of the nestlings would ever have the chance to grow, mature and become reproductive.

However, in a barn, the rodents would be able to feed, drink and reproduce with minimal disturbance and almost all of the offspring would live to grow to adulthood.  Additionally, if the facilities were well protected, they would even be able to live a longer lifespan and multiply much faster than what would typically happen in a wild setting.

So how fast can a rodent population get out of hand?  It comes down to the reproductive capabilities of the animals.  Both rats and mice are fairly similar in their reproductive traits.  The gestation period for mice is 19-21 days where the gestation period for rats is 21-23 days.  Both rats and mice usually give birth to 7 to 12 pups but both can have in excess of 20 pups at a time.  Puberty, in both species is between 5 and 6 weeks of age and both rats and mice can breed back within a couple of days of giving birth.

What does this mean?  Well having one mouse or one rat is not a big problem.  The problem starts when you get two individuals, one male and one female.  One pair of mice or rats will breed (females come into heat every 5 days or so), so within a week you are going to have a pregnant female.  Considering the safe, ideal conditions in a barn, lets just assume 12 pups in a litter.  Within a month of the two individuals getting together, we are up to 14.  That assumes the two parents and 12 babies.  Within 6 weeks, you would expect that the mother would be having her second litter and the babies would now be reproductive.  So then we are dealing with 6 more females (assume 50 percent males and 50 percent females in a litter).  By 13 weeks, we have 7 females each having 12 pups or 84 new pups, plus the 7 additional males for a total of 91 mice (or rats).

Move ahead another 9 weeks and one half of those 84 pups or 42 would be female and having another 12 pups for a total of 504 pups, plus the 91 adults or 595 individuals.  It gets worse if we follow it out further but you can get my point in how fast a population can grow in a relatively short timeframe.

Ultimately, it comes down to the fact that you need to stay on top of a rodent problem to make sure it does not get out of hand.  While a lot of mice is a problem, a lot of rats is an even bigger problem.  Loss of feed, soiled feed, chewed electrical wires and pens, rats can even chew concrete if given enough time.  Truth be told, a lot of barn fires are probably caused by rodents chewing on electrical wires.  Definitely something that you should be on the lookout for.

So, how do you prevent being overrun with rodents on your farm?  The key is to have a plan in place for control.  I’ve had some folks tell me that they rely on barn cats to do the job and if you happen to be lucky enough to have a couple of good barn cats that, may work, however, they need to be hungry enough to do the job.  Additionally, you also need to be aware that cats are indiscriminate killers and when left outside, it is well documented that they will kill many other things like song birds, rabbits etc. that you may not want them to kill.  You cannot control what they eliminate.

I’ve also had some folks tell me that they prefer to leave snakes in their pens to control rodents, however you also need to know that some species of snakes routinely eat eggs and birds/chicks.  In my area, the black snake is a known bird/egg eater so you would have to deal with that as well.  Additionally, I have had black snakes eat entire clutches of eggs and kill full grown ducks, right on the nest.  What do you do?

Perhaps the best option for most folks is to use poison, but to do so in a very controlled way, that prevents off target animals and birds from gaining access to that poison.  One way that this can be done is with the use of commercially produced bait stations.  Bait stations are essentially boxes that provide rodents with an entryway that is sized for the rodents and will keep most other non-target animals out of the station.  Inside the station is a separate area where the poison can be placed. 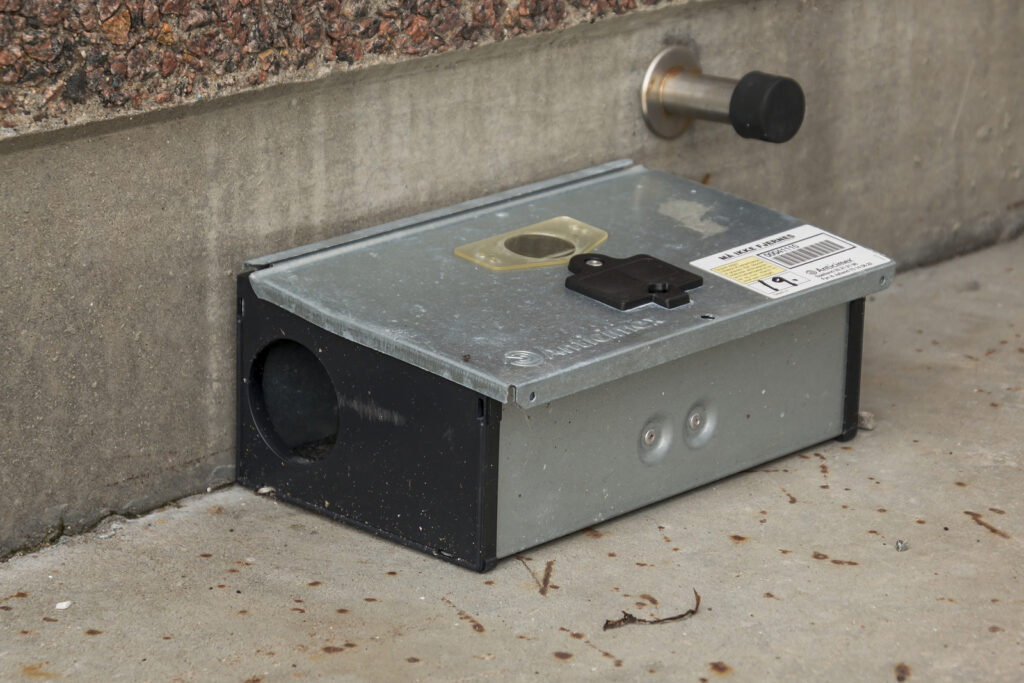 Most rodent baits are available in a couple of forms.  Pellets (which may not be the best choice as they are approximately the same size as feed pellets) or bars.  If you use bait bars, there is a lot less likelihood that non-target animals/birds can take the bait.  These can be placed inside the bait stations and the likelihood of them being carried out is reduced.  One other type of bait station that I have seen made (home-made) is a length of PVC pipe (3 inch diameter) and configured into a T shape.  The bait can then be secured on a flat piece of wood (kind of like a yard stick) and then stuck into one end of the PVC pipe.  Essentially the rodent would go into the PVC pipe and the bait bar, being attached to the stick would prevent them from removing the poison out of the pipe.

The last thing you need to think about is what type of poison is appropriate for rodents.  You will sometimes here folks talk about an anticoagulant poison called Warfarin.  Some people will even claim that their rats are warfarin resistant!  Truth be told, the only place you are likely to find warfarin resistant rats is in the inner cities that have been baited for years.   Warfarin is one type of anticoagulant that causes the rodent to hemorrhage and essentially bleed to death.  While they are dying, they often seek out water so it is critical to keep your eyes open and pick up any dead rodents that die outside of their burrows.

There are many other types of bait available some with different modes of action including bromethalin and colecalciferol which cause seizures or disrupt the calcium use in an animals body.  All of these rodenticides are known by many different trade names.  Havoc, Rampage, Just-One-Bite are just a few.  Don’t purchase a lot of bait until you are sure your rodents will eat it.  Sometimes it is good to rotate baits as well, especially if you are dealing with a large population and the rodents become bait shy to a specific bait.  As a word of caution, when purchasing rodenticides, be sure to read and follow the label directions on the packages.  Oftentimes, instructions are also provided for what to do if an off-target animal should be exposed to the poison.  This is good information to have on hand just in case.

The key to remember with rodent control is that the best approach is to start before you ever have a problem.  When rodents first show up on the property and are in very low numbers they are very shy animals and will often go to a bait station to feed as opposed to eating the feed out of your feeders.  You need to be ready and have your bait stations up and baited to prevent a major problem from developing.

If you have a large population, your approaches may have to change.  In those cases, where the population is bolder, you may have to make a major effort to remove any feed and limit feed your birds, what they will totally clean up at feeding time so as to not leave excess feed around for the rodents.  Then, by placing bait in strategic locations on your farm, you would encourage the rodents to go to the bait.  Never overuse the bait but put it out in smaller amounts until the rodents have used it up and then immediately replenish the bait.  Excessive bait placement will typically encourage the rodents to gather and stockpile the bait underground.

One additional thing that I think should be mentioned is trapping.  Mouse traps and rat traps can be used for smaller populations of rodents and can be an effective non-chemical control measure provided you have enough traps and you rebait and check them regularly (daily).  Again, if your rodent population gets very large, trapping generally is ineffective.