This article on the Welsh Harlequin Duck is being republished from Acorn Hollow Bantams website with permission from Lou Horton. Please note image is of a Gold Welsh Harlequin which are not admitted to the APA Standard of Perfection.

I have admired the Welsh Harlequin Duck ever since I first saw them at Dave Holderread’s place in Oregon well over a decade ago. I found them to be both beautiful and appealing from a practical point of view since they are excellent producers of large numbers of white shelled eggs and high quality meat. An active breed, they would seem to be an excellent candidate for the small homestead given their excellent foraging habits and ability to garner a large percentage of their living if allowed on quality pasture.

The Welsh Harlequins are reported to be a sport of purebred Khaki Campbell ducks which were developed by Leslie Bonnet of Wales in the U.K. during the nineteen sixties. That would certainly account for their reputation for producing from 240-330 eggs per year when well managed. 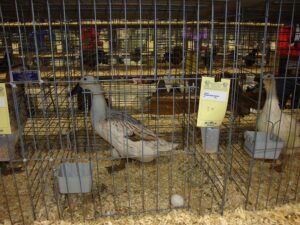 The Harlequins were imported into the U. S. in 1980. The birds are standardized in the 4 1/2 to 5 1/2 pound range and breeding stock should be selected to stay in that weight range so as not to jeopardize the dual qualities for which they are prized. To that end, Welsh Harlequins were designed to weigh a full pound more than the Campbells from which they came. While there are other breeds with similar marking patterns, (think of the Snowys and Appleyards) the Welsh Harlequins are described as being genetically unique. Two color phases exist. There is a silver and a gold phase. The term color phase indicates that while the basic underlying markings are the same, there is an overlying color which differs. In the U.S., the Harlequin is only standardized in the silver color phase. Ironically, the original importation was of the gold color phase. If one raises a flock of either color for long, one is likely to get some ducklings of the other color phase. How did that happen? The group of breeders who banded together to organize the required Qualifying Meet prior to standardization decided to go with the silver color phase. Perhaps they felt that the silver phase was more striking with a greater amount of contrast. That only matters to the keeper if one plans to show ones Harlequins or plans to sell stock to those who would show them. If shown at even county fairs where the APA Standard is the guide, technically, a non-standard variety should not be placed any higher than best of variety.

Of course, there is nothing stopping interested Harlequin breeders from going through the standardization process for the gold phase of the breed. It would be a worthy project.

In addition to the nuptial and eclipse plumages common to all ducks derived from the Mallard, there is an obvious difference in the plumage of both sexes when they are in juveniles. Once young birds reach 4-5 months of age, they acquire the more vibrant adult plumage.

Disqualifiable defects in show birds include eye streaks in either sex, lack of a neck ring in males in nuptial plumage, and solid yellow or orange bills in adult females. I suspect that the last DQ stems from a cross with commercial Aylesburys made to increase the gene pool diversity after their importation.

Frankly, I am surprised that we do not see more Welsh Harlequins given their obvious qualities.