The Dominique chicken has gone through all of these names through the years, and could be comparable to the Morgan horse because of its influence on American poultry.

The Dominique’s origin is unknown. One theory is that they came with the Pilgrims to the New World, while others believe that they were developed in the French Island of Saint Dominique, now modern-day Haiti.

Dominiques were crossed with Black Java chickens, another old, rarer breed, to create the larger Barred Plymouth Rock chicken in the 1860’s.

The Dominique chicken was the breed of chicken found in coops across the colonies from the 1750’s on. With their hardiness, camouflage, weather endurance, excellent egg laying skills and foraging, they made the perfect homestead chicken. The gentle Dominique was taken along on wagon trains out west and spread across the US. It was accepted into the very first Standard of Perfection of the American Poultry Association in 1873.

Unfortunately, the fate of the breed took a turn for the worse in the 1920’s when many main advocators of the breed passed away. During the Great Depression, Dominique chickens were highly appreciated for their low maintenance, but after World War Two and the advancement of commercial poultry farms, the Dominique fell into the background. Its successor, the Barred Plymouth Rock, took the spotlight and the Dominique started to decline.

There were only four breeding flocks in 1970, and the Livestock Conservancy took action to save the breed. It was labeled on the “watch” list as of 2021 and the number of birds is steadily rising.

The Dominique is a rose comb breed, their red combs short and laying flat against the head, which minimizes the danger of frostbite found in single comb breeds. They lay around 280 light brown eggs a year, and dress out to 4.5 lbs of meat for cockerels and 3 lbs for pullets at 16-20 weeks of age, making them substantial dual-purpose chickens.

The chickens are friendly and personable. At our farm, our two friendliest chickens are two Dominique hens named Sue and Star, despite being handled the least as chicks. Star comes to the back porch begging for food and allows herself to be picked up in the middle of the yard.

Their flashy coloring and calm nature makes them popular exhibition birds, and they even have their own breed organization. Because they are so easy to raise, many youth use them in 4-H projects.

Roosters have a U-shaped back and a tail set higher than many American breeds. Hens have a sloping back outline from head to tail. They are yellow skinned and have red earlobes and wattles. They do well free ranging and in confinement. 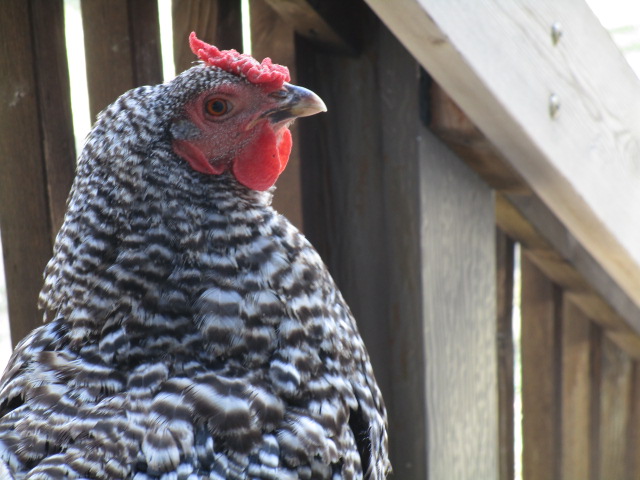 In conclusion, whether you’re just starting out in chickens or are a seasoned chicken breeder looking for a new breed to try out, the Dominique excels as a dual-purpose chicken, farm companion, and exhibition bird. They make an excellent addition to a coop or homestead, and they are one of the best chickens out there for children to raise. If you’re looking for a new breed of chicken, it would be well worth your time to look into the Dominique, the All American chicken.

Allie Lynn, a farm-loving teenager, fell in love with chickens and ducks after reading The Backyard Homestead Guide to Raising Farm Animals, edited by Gail Damerow. Now the caretaker of the poultry on her family’s farm, Allie plans on helping advocate the Ancona duck breed and hopes to be one of the breeders at an approval meeting someday. Her favorite birds are a Dominique hen named Star who loves tapping on the window for treats and a Khaki Campbell duck named Ming-Ming, who defies the stereotypical “nervous Campbells” by being the most gentle duck in the flock. When she’s not caring for her birds, Allie writes novels and reads books about the poultry she loves.