The Black Minorca originated on the island of Minorca in the Mediterranean region where they were kept for production of large, chalk white eggs as well as for their meat. Weighing in at nine pounds for cocks and seven and a half for hens, Minorcas are the largest and heaviest of the Mediterranean breeds. Combine this size with smooth, tight feathering, shiny black coloring, large combs on males, the lopped combs on the females and large solid white ear lobes, Black Minorcas in good condition are imposing and impressive to say the least. Add to this their high station and long bodies, they give the impression of being the largest of poultry breeds, and in many ways they are.

I saw my first Minorcas in York, PA sometime during the late sixties. My first impression was that I did not know chickens of this size existed on the planet. I was very impressed to the point of love at first sight, and that affection has grown. Having kept and bred them for several years, they are all I expected and more, and I continue to learn about them and appreciate them more with time. Minorcas are very distinctive from other Mediterraneans in several ways. You would expect them to cackle louder and deeper than their nearest relatives, but here is one of the distinctions. Their voices are much higher than Leghorns. Females cackle much higher pitched and their cackles are repeated much faster than their nearest relatives and this is very noticeable.

Males and females go through what I call an eclipse while moulting, in that their combs shrink noticeably to the point some become unrecognizable. It is hard to imagine a large Black Minorca hen in production with a large lopped comb going into a moult and her comb shrinking about 50% then standing up and losing its lop. These combs return to normal when moulting is over and egg production starts up again. The Minorca cock’s comb shrinks considerably when they go out of condition and into a moult. I’ve had people see old males in a moult here and remark to me the effect “where are your good males.” 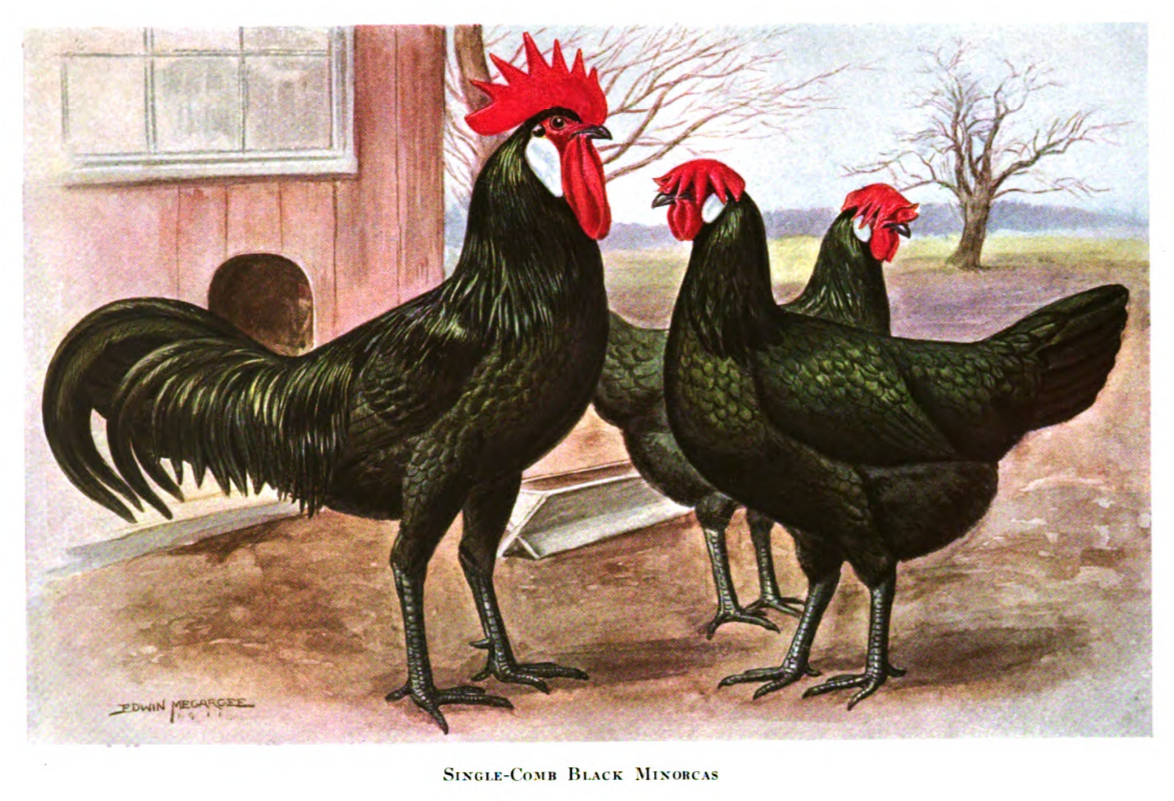 Another different aspect of Minorca raising is comb selection and timing of same. Leghorn cockerels give you a good idea of what kind of comb cockerels are going to have when they are about three months old. Minorca cockerels on the other hand have a cluster of jammed together upright points on a dried up looking comb and Leghorn breeders see these and think there’s not a good one in the lot. Minorca cockerels develop their combs much later than the other Mediterranean breeds; you simply have to wait. Minorca pullets have a tiny serrated comb that doesn’t develop until they come into egg production. These pullets will go from that tiny, almost unnoticeable comb to having a nice big double lopped comb in about four to six weeks. Minorcas are rangers, much more so than other Mediterraneans (I know, I have Leghorns, Andalusians and Spanish) and they travel over large areas much like turkeys.

In the beginning I was often told you had to maintain two lines, male and female, to maintain big upright male combs and good lopped female combs. The key to good combs is to breed from only females that are double lopped correctly and males with good, big, upright combs. It is true that a lopped comb male will throw lopped combed daughters, but the same true of a good headed male whose mother and grandmother were lopped combed females . If female combs are a problem for you, you can take a son of a lopped combed female and breed him back to his mother and aunts as long as the aunts are lopped combed too. I pay attention to six point combs on males and females, but a good seven pointed comb is better in my way of thinking than a poor six pointed male comb . What is one extra or lacking point on an outstanding bird? Or what good are six points on a mediocre bird lacking type? Type is everything and without it you have nothing. You can correct and change small problems and shortcomings, but you have to have type to begin with and this is true in any breed .

A Minorca male should have a good large upright comb that does not lift up where it joins his head at the end of the comb, rather it should follow the head and neck line and go down, the opposite of a Leghorn comb. I pick females by catching them and standing up their combs. They should have six points, again, if they are up one or down one point I keep them.

Size is something you have to pay close attention to in large breeds. This is America and bigger is better. You know how we Americans are. I raise a few batches of Minorcas each year, starting in late winter and hatching up to late summer. I take a batch to about ten to twelve weeks old. At this age I separate pullets and cockerels paying close attention to height, leg size and weight. At this point I do not keep the smaller birds in the group, keeping the larger end of each particular hatching. The smaller ones never catch up to the larger ones when they’ve all had the same care and treatment. This is the reverse of bantams where only the smaller birds are kept because they’ll grow on you, just like large fowl will shrink on you after a few generations. Big feet, big thick legs, good sound legs, long bodies and good tail carriage are what I select for at this stage. Later I pay attention to spurs and keep the spurred females as they tend to get the largest and I feel throw the largest sons and daughters. 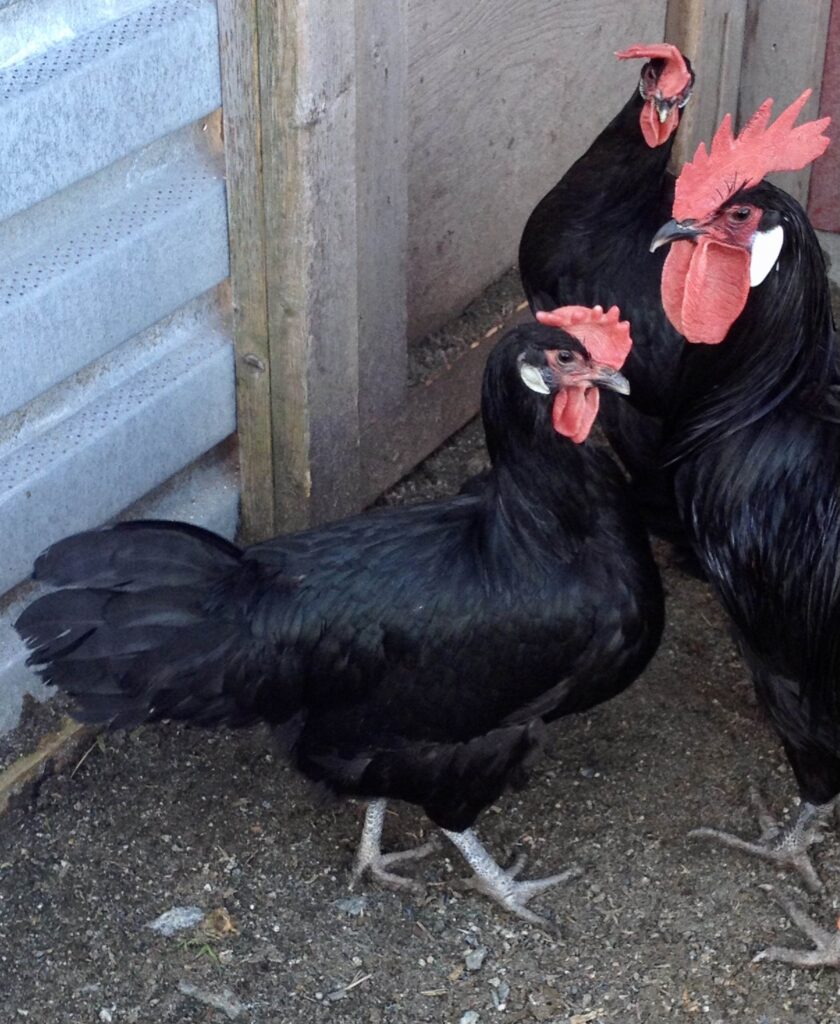 Minorcas are rugged and fast growing. In addition to keeping starter and grower in front of them, I get them out on range as soon as the weather -permits. They eat a lot of grass and insects. They appreciate sour milk, buttermilk, table scraps, egg shells, fruit peelings, just about anything they can get. They will attack whole boiled eggs from two days old. By nature they are active and moderately high strung, but they are a dream to handle. They never get as tame as Leghorns even after having been shown repeatedly, but then they are never wild either. They keep that nervous edge which is highly beneficial in a show. Leghorns on the other hand are wilder and have to be tamed down. My problem with Leghorns is that they sometimes become too tame.

The Black Minorca is a dream breed to keep, breed and handle. If they are kept in large areas say 50 by 100 feet or so they will stay with in a five foot fence, unlike Leghorns and Sumatras. They consume more oyster shell than any breed we keep, no doubt due to the production of large eggs, and I will add Minorcas out lay any breed here. Combs and points will freeze on males when temperatures get down below eight degrees Fahrenheit. That is a problem and complaint of some breeders. Our birds don’t go to bed hungry or thirsty, and when it is terribly cold, the males go inside in boxes for the night.

If you have the space and time, consider the Black Minorca, they are one of the most outstanding and rewarding breeds of poultry. There is nothing prettier than a majestic Single Combed Black Minorca cock out on green grass with about fifteen good females in spring, pecking and scratching, their heavy lopped combs bobbing around much like the hats on a group of ladies on Easter Sunday. They look equally as impressive in the show hall!