Harry Smith, W. was born December 23, 1875 in Brent, County Devon in England.  After immigrating to the U.S. he lived predominately in Massachusetts and died there in July 10, 1951.

Until I started researching history of the APA, I had made the assumption that W. Harry Smith was an artist hired by the A.P.A. This was not the case, he was an employee of the Boston printing firm of Murray and Emery Company.   It is not known if he was a staff artist for the printer or if he was contracted by them to do the work on the Standard.

We will never know why Murray and Emery chose to change or “mutilate” the artwork submitted for the original 1910 Standard of Perfection.   Reading various accounts it appears as though the young lady responsible for airbrushing the backgrounds may have in-fact over-sprayed the paint, erasing critical portions of the original artwork.   What is known for sure is that the artist, W. Harry Smith, prepared the submitted artwork for the engravers.

We wondered at the tenacity of W. Harry Smith’s affixing his name – in bold letters to the American Dominiques and the shoebutton Buckeyes – – wondered who he was and how discovered.  But it is now plain to be seen that it was all for the best.  If this young man had not signed his name someone might have thought that a poultry artist had drawn these wonderful pictures – – or perhaps Johnnie Robinson would have tried to fix the blame on the editor of R.P.J.

By far the worst-mutilated sketch in the possession of Mr. Sewell at the time we saw him, October 23rd, was that of the White Plymouth Rock male. Mr. Sewell‘s beautiful art work on this sketch had not been merely altered and added to—it had been literally butchered. The person or so-called artist who did the work of alteration and addition was not even a good commercial artist, judging by his workmanship, let alone being a well posted or experienced poultry artist.

What the others noted in their letters is the fact that the artist who tampered with their works was unfamiliar with standard-bred poultry specifically and birds in general.

From online sources we learn that Harry Smith, W. was best known for his mural paintings.  His genre is listed as Human Activity, Daily Life, Marine, Maritime, Riverfront, Boats and Canoes with some Nature Landscapes.  Here is an example of his work.  As you can see he was a talented artist. 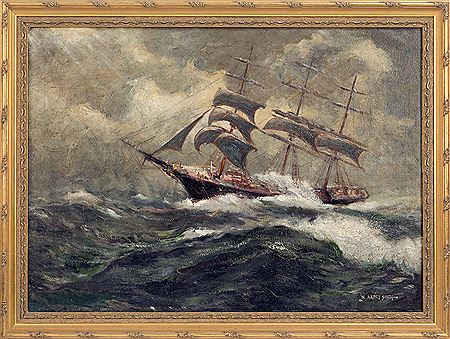 But, we are not in the business of fine art, rather we are dealing with the world of Standard-bred poultry and there he fell seriously short.

Here we see the cobbled together picture of an American Dominique male.  What Sewell noted in the picture was the fact that the basis of the picture was his work on the Barred Plymouth Rock male with a few adjustments – it was nothing like a Standard-bred Dominique. 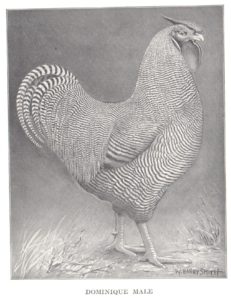 Other than his work on the Standard of Perfection for the printers Murray & Emery, no reference has been found where he drew poultry again.

So, even though Mr. Smith was not a poultry artist he did directly contribute to one of the more interesting and colorful periods of Standard history.