Chiggers also are known as red bugs, jiggers, harvest mites and by other common names. More than 700 species are known, but only three or four are important parasites in the United States.

The adults usually are covered with dense, feathered hairs that give them a velvety appearance. They are often bright red with a figure- eight-shaped body.

The parasitic larvae are about 1⁄150 inch long, reddish or straw colored, and not as densely covered with hairs as the adult. The larvae are barely visible to the naked eye.

The most common and widespread species in the United States is Trombicula alfreddugesi. This species is found on a variety of hosts, including people, fowls, reptiles, amphibians and mammals.

The larvae are most abundant in the transitional areas between forests and grasslands and along the margins of swamps. They are active in the north from July to September, but they may be encountered throughout the year in southern semi-tropical areas of the U.S.

Trombicula splendens is not as widely distributed as T. alfreddugesi, but their ranges often overlap. Trombicula spendens occurs in eastern half of the United States but ranges into Texas and prefers more moist habitations than does the common chigger (T. alfreddugesi). Its seasonal pattern is also similar to T. alfreddugesi.

This species feeds on mammals, birds, reptiles and amphibians, but the most common natural hosts appear to be reptiles, especially snakes and turtles.

Another chigger, Trombicula batatas, exists primarily in tropical areas and ranges from the United States to Brazil. It prefers open, sunlit, grassy areas, especially where domestic animals are kept, but it is not abundant in jungles or wooded areas.

It attacks humans, domestic animals and poultry, but its preferred hosts seem to be ground-inhabiting birds.

The range of the chigger Neoschongastia americana americana (Hirst) extends across the southern states from the Carolinas to California. It is more abundant in areas with hard soils that crack open during hot, dry summers and in areas where rock outcroppings occur. 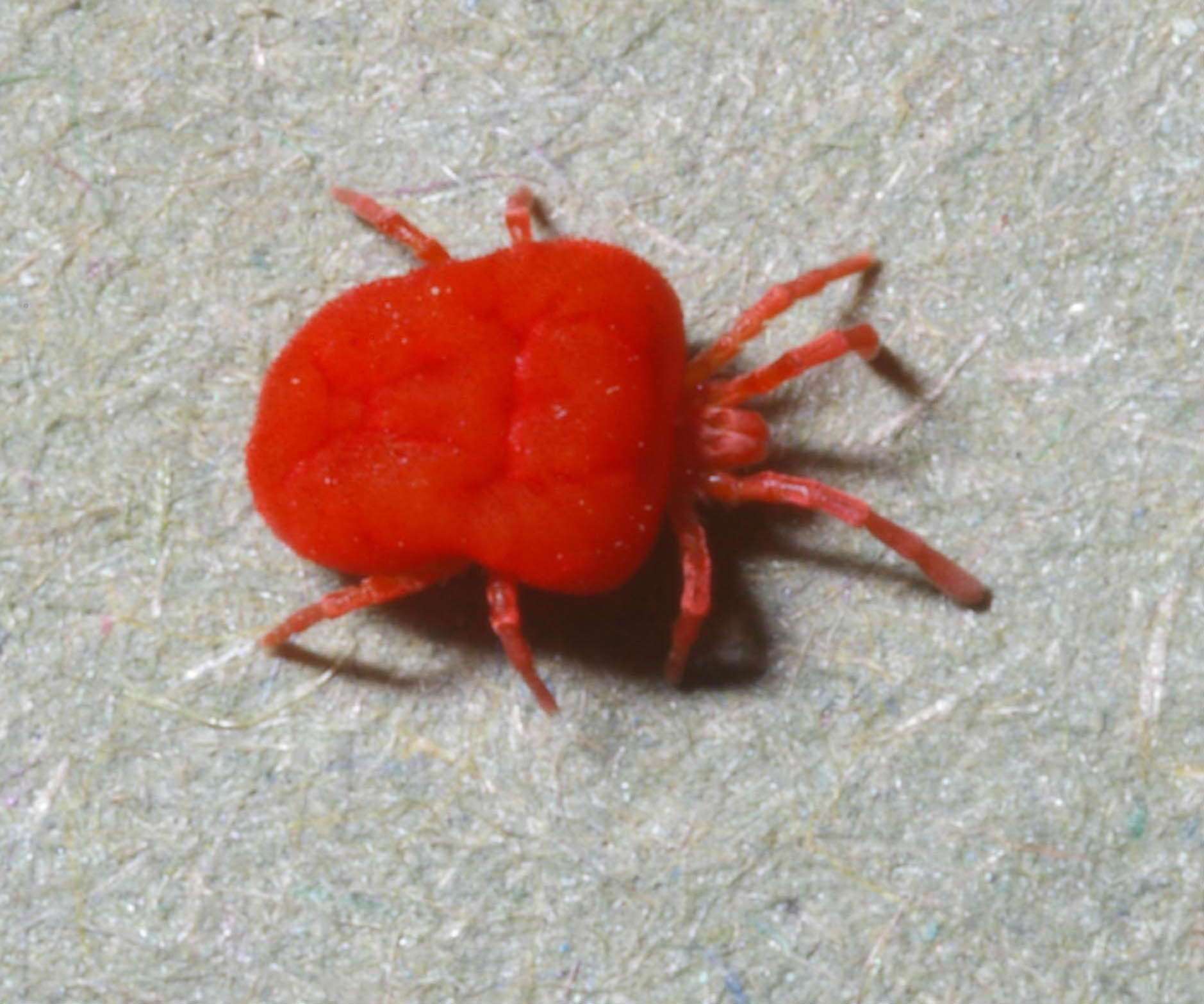 Populations begin to increase in late April or May, peak in June and decline in late July or August. There may be an increase in September or October, and by late October or November it disappears from the host.

Domestic hosts are turkeys and chickens. Wild hosts include quail, woodpeckers and other wild birds.

The life cycle of chiggers differs from that of other mites. Most chiggers undergo five developmental stages: egg, deutovum (the larva
is enclosed in a membrane in addition to the eggshell); larval, nymphochrysalis (a quiescent, or inactive, stage that transforms to the nymph); nymphal, imago chrysalis (a quiescent stage that transforms into the adult); and the adult stage.

The eggs usually are deposited singly in the soil. After a 4- to 6-day incubation period, the eggs hatch into the deutovum, which remains in the eggshell fragments for about a week before the six-legged larva emerges. Larvae crawl around rapidly in search of a host and may survive 2 weeks or more without one.

The larval stage is the only parasitic stage in the chigger life cycle. The larva usually feeds only once. It most often completes feeding in 1 to 4 days, but in some instances may require up to a month. When feeding is complete, the larvae drop to the ground, burrow into upper layers of the soil and become inactive.

The nymph is larger and more hairy than the larva. It probably feeds on insect eggs and early stages of other arthropods. After about a week, nymphs enter a quiescent stage, and emerge as adults in another week.

The adults are larger, hairier and sexually mature. Adults are ready to deposit eggs within a week, and egg laying continues for several weeks, probably as long as favorable conditions exist. Under laboratory conditions, observers have counted as many as 4,764 eggs deposited from a single female within 23 days.

Neoschongastia americana americana is the most abundant external parasite on turkeys grown on ranges with rocky outcroppings or hard soils that crack during summer when they become dry. Chiggers feed in clusters on the thigh, breast and underside of wings, and around the vent. These clusters cause scabby lesions that require about 3 weeks to heal after the engorged chiggers leave the host.

Chiggers normally do not burrow into the skin or suck blood. When the chigger is firmly attached, it injects a digestive enzyme into the wound that liquefies host tissue. It sucks up the partially digested, liquefied host tissue, leaving a tube called a “stylostome.” The digestive enzyme that hydrolyzes the host’s tissues is prob- ably responsible for the severe irritation and raised bump that results from chigger “tubes.”